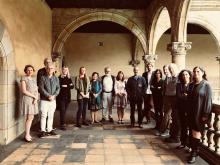 Description of the meeting

Understanding the intellectual, sociological, and political aspects of law in the Middle East has been hampered by an unfortunate and outmoded disciplinary divide. Social scientists—chiefly in the fields of political science, sociology, and some legal studies—have focused much of their attention on modern structures, probing how laws are written, courts are structured and adjudicate, citizens litigate, and regimes deploy law as an instrument. Scholars from these disciplines often encounter intellectual approaches, doctrines, and ideas that are deeply rooted historically, many (but not all) of a religious provenance, with a strong influence of the scholarship on Islamic law. These disciplines stress generalization at the expense of diversity and causal inference at the expense of path dependency. But they are often less well equipped to go beyond a fairly superficial understanding of history and doctrine, as even those scholars who are friendly to such subjects are entirely reliant on secondary sources.

At the same time, those who approach law from an area studies viewpoint or from various disciplines more anchored in the humanities and more interpretive social sciences (such as religious studies, history, and anthropology) excel with the study of texts, intellectual history, legal thought, and the premodern period. But the questions they ask tend to be resistant to generalization and comparative analysis; and when they do make forays into the modern period (as anthropology does), it is generally to develop rich but highly contextualized understanding.

Our aim in this workshop is to bring together a group of scholars who have made individual forays toward bridging this gap in a more comprehensive and collaborate effort aiming at understanding the politics and sociology of law in the modern Middle East. In designing this workshop, we are reaching out to a range of scholars—fairly senior figures, middle-generation academics, and some at the beginning of their careers. We have also worked to cover the entire region and to draw on academics who have been trained in a variety of locations (North America, Europe, and the Middle East).

We have selected participants not simply for the quality and focus of their individual research but also for their demonstrated interest and ability at working across disciplinary, historical, and geographical divides. We intend to draw heavily on a workshop format to ensure cross-fertilization of ideas and approaches and produce a coherent set of essays on the history, politics and sociology of law in the Middle East, while collaboratively elaborating a comparative analytical framework for doing so. This comparative framework for the analysis of Middle Eastern legal systems will, eo ipso, also be more broadly comparative in that it will engage with theoretical concepts whose empirical grounding is in the historical experience of Western political and legal evolution.

To what extent do classical understandings of law inform current practice? Is the Islamic legal heritage the only approach with pre-modern roots that has influence today? How has the nature of law, legal authority, and statecraft evolved?  Some implicit answers to these fundamental questions will be built into the design and comparative framework of the workshop. We shall consider axiomatic the fundamental historical fact of ethico-legal pluralism in the Islamicate civilization. Macrosociologically, the notion of “Islamic law” is highly problematic. There is of course the highly elaborate Islamic jurisprudence (fiqh) whose evolution is fairly well understood, as is its primary consequence of dividing the Muslim world into four major Sunni and major sectarian Shi`ite and Kharijite Rites or Schools of Law. What is impossible to maintain historically is the system of Islamic jurisprudence currently called the “Shari`a law” was ever tantamount to the public or constitutional law of any Muslim kingdom or empire. Historically, the legal systems of Muslim kingdoms and empires were thoroughly pluralistic. Once again, it is only the religious aspect of this legal pluralism, as exemplified by the Ottoman millet system, which has received any attention in the Middle Eastern legal scholarship. The historically decisive pluralism of the legal order, resting on the Persianate tradition of political ethic and statecraft as well as Turko-Mongolian legal tradition of public dynastic law have never been systematically integrated with Islamic jurisprudence to produce a historically adequate and convincing picture of Perso-Turkic Islamicate legal systems of pre-modern Middle East. It is the goal of our workshop to do so as a step toward a macrosociology of law in the Middle East.

Our experience in Oñati

On May 24-25 2018, participants in a workshop on "Historical and Comparative Macrosociology of Middle Eastern Legal Systems" discussed research on Middle Eastern legal systems, seeking to integrate insights from more historical and area studies based approaches with those that are more social-scientific in approach. The workshop, led by Said Armomand of Stony Brook University and Nathan Brown of George Washington University, discussed four general themes. First, translation: what happens when legal ideas, words, and clauses move across borders and cultures? Who moves them and with what purpose and what effect?  Second, religious traditions and the modern bureaucratic state: Middle Eastern religious inquiry often focused on law; the construction of modern bureaucratic states that work (in part) through law has led it to interact deeply with religio-legal traditions. Third, constitutional law: almost all Middle Eastern states have modern constitutional traditions; how do they affect and inform governance? Finally, family law: law, religion, and politics often intersect (and not just for Muslims) in matters of marriage, divorce and inheritance.